Is India ready for Bitcoin, Blockchain & other Cryptocurrencies? 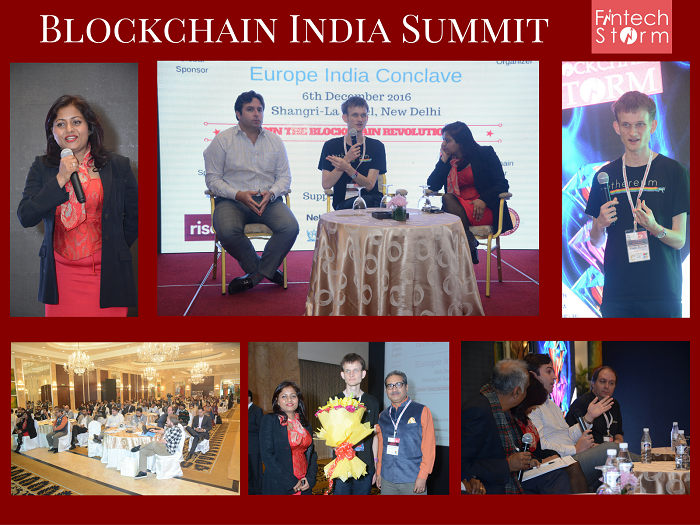 India’s first ever Blockchain Summit was held in Delhi on 6 Dec 2016 with Vitalik Buterin , Founder Ethereum Addressing a gathering of an excited crowd at the December 6 2016 summit at Shangri La Hotel, comprising of 150 Tech enthusiasts from Microsoft, Wipro, ConsenSys, TCS, Accenture, Synechron, National Payments Corporation of India, and several of India’s Bitcoin and Blockchain startups, Vitalik Buterin advocated Blockchain technology’s transformative potential in India to make Smart Contracts possible in fields such as agricultural markets, education, healthcare, Identity based transactions, Microfinance and Financial Inclusion. ”I am excited to see the growing interest in Ethereum and blockchain technologies coming from India; the world is finally waking up to the great potential that the technology has particularly in emerging markets, and I look forward to seeing developments with the technology grow in the months and years to come” - Vitalik Buterin.

The first ever Blockchain India Summit is timely as it coincides with the ruling BJP’s recent currency-ban fiasco and illuminates the power of decentralised Person to Person platforms like bitcoin and blockchain to sidestep the traditional models of issuance and supply-control mechanics of fiat currency, and to counter the authoritative control of Central Banks and Governments.

Ms. Arifa Khan, the Conference Chair, welcoming Vitalik Buterin to India for the first time said, “it is a rare privilege to be in the midst of an inventor of the stature of Mr. Buterin, with not only an unparalleled mastery of the most exciting technology of our times - Blockchain - but also with a multi-dimensional understanding of business, economic, political, legal aspects of his invention. It is humbling to host, interact and learn from a genius of this magnitude in India, who is toast of town with central banks, regulators and governments around the world, and can dramatically transform the established ways of working of banking and financial system everywhere. We will extend every bit of cooperation Vitalik ever needs in India and other emerging markets to take Ethereum mainstream and to support his research efforts in solving cryptographic challenges.” Buterin is a keen nurturer of developer communities around the world, and focuses his time on mathematical advances in solving privacy and scalability issues of current blockchain protocols and and evangelising the work of his non-profit foundation ethereum around the world.

Mr. Buterin is the only known face in the world of Blockchain after the elusive and the mysterious Satoshi Nakamoto, to have captured the public imagination. His cryptocurrency ether is the second most popular after bitcoin and is currently valued close to $1 billion, after bitcoin’s $10 billion.

Mr. Buterin has overseen several ponderous decisions such as obtaining consensus from investors on effecting a hard fork in Ethereum’s Decentralised Autonomous Organisation (DAO). The hard fork, generally scoffed at by purists of blockchain, was administered for damage control by consensus of investors when the crypto fund found itself vulnerable to a $50 million theft by a hacker. Mr. Buterin displays giant intellectual capacity, remarkable maturity, acutely sharp intelligence to assess people and a multi-dimensional grasp of varied complexities of world economy and business - all pointers to a Nobel Prize in years and decades to come.

Answering a question from the audience on whether writing smart contracts can ever be made free of gas - the computational fuel required on ethereum to upload any smart contracts - Vitalik advocated some sort of transaction fees for sending blocks and also incentives for miners so as to prevent the protocol from being jammed by frivolous computational requests. Every economy has to have self-governing self-sustaining market rules, and crypto economy is no different.

Answering Ms. Khan’s question on how easy it is to create a new cryptocurrency in India, Vitalik said it is a matter of copying 50 lines of code, but the challenge is in building the value of the new token and a circular economy around its acceptance.

The Blockchain India Summit was sponsored by CryptoCarbon - a new cryptocurrency behind loyalty rewards and Microsoft, the software giant which has introduced Microsoft Azure’s Blockchain as a Service platform to ride on the growth wave of Blockchain.

The Indian bitcoin blockchain enthusiasts were over the moon to meet Vitalik and took unending selfies, which the inventor graciously and politely obliged. India is eagerly looking forward to more developments from Vitalik and Ethereum.

Ms. Khan said she was honoured that Vitalik accepted her invitation to be adviser on Blockchain Council India she is founding for Indian Banks & FIs.

Vitalik will do a tour of Ms. Khan’s south India to lecture on Cryptocurrencies at IIT Madras, her alma-mater, on 9th December morning and at C.R. Rao Advanced Institute Hyderabad on 9th December evening. Vitalik will later stop in Ms. Khan’s favourite city Mumbai interacting with Blockchain India Summit’s media partner CNBC, and generating interest for Ms. Khan’s Blockchain Council India before his departure. Ms. Khan’s Zero Field Labs will host Vitalik in Dubai for the first time in first half of 2017 in partnership with Microsoft, Synechron.