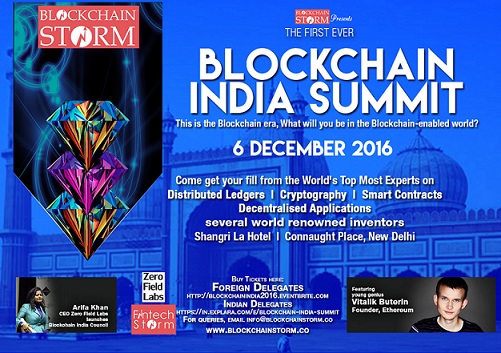 Vitalik Buterin , Peter Thiel Scholar said "I am excited to see the growing interest in Ethereum and blockchain technologies coming from India; the world is finally waking up to the great potential that the technology has particularly in emerging markets, and I look forward to seeing developments with the technology grow in the months and years to come.”

Blockchain or Distributed Ledger Technology (DLT) is the technology behind bitcoin. DLT has seen more than $1.4 billion invested in three years and 2,500 patent filings. It is predicted 80% of banks will have initiated DLT projects by 2017. Most DLT investments have been made by marquee names as Goldman Sachs, Barclays, J.P. Morgan, UBS, Credit Suisse, Visa, Mastercard, NASDAQ etc.

A World Economic Forum report noted that DLT would replace the existing global financial infrastructure, but that it would be a big undertaking that requires collaboration between multiple players. Ms. Arifa Khan who combines domain expertise in Blockchain technology as well as Banking, having started her investment banking career with UBS in 2004, and trained extensively in New York and London post her MBA from Wharton, is now leading efforts for Indian banks to form an independent regional blockchain consortium.

The long-held view that central banks have no competitors for issuing currency has been challenged by bitcoin. Vitalik Buterin’s “ether” is the second most prominent cryptocurrency valued close to $1bn, after bitcoin which is valued at $10bn. Dr. Raghuram Rajan, former RBI Governor stated that bitcoin is “fascinating”, and that RBI could release its own digital currency, but that such an issuance could take years to undertake if attempted, perhaps 10-20 years. “Virtual currencies will certainly get much better, much safer and over time will be the form of transaction. That’s for sure.” – Dr. Rajan

Most RBI revenues are generated from senorage - holding currencies free of interest. So what would RBI do for revenues when holding currency is no longer their function? “Effect of virtual currencies on fiat money, and effectiveness of Monetary Policy - these are some questions that the Finance Ministry and Central Bank have to ponder, in the face of possibility of worldwide adoption of cryptocurrencies & blockchain,” said Ms. Arifa Khan on a panel discussion with Ripple at a Payments International in London last week.

Gates Foundation is exploring blockchain’s potential to reach 200 mn unbanked in India. Reaching the last mile financial inclusion is a game many corporate houses are keen to play in India. The Payment Bank licenses are a great step to pave way for unbundling banking.

Though the ruling party introduced Jan Dhan Yojana and opened bank accounts for remote populations, more have been cash-stripped and rendered destitute in the current currency-ban chaos, which is now being dubbed by the disenchanted as Jan Nidhan Yojana. Bitcoin is immune from vagaries of arbitrary Govt. control, as it is a peer to peer network which does not depend on any central authority for its functioning.

Microsoft is excited to be partnering with Fintech Storm/Blockchain Storm to host the first ever Blockchain India Summit 2016 as a Global Blockchain Partner.

Bitcoin and blockchain would present numerous interesting propositions and use-cases, which Blockchain India Summit will explore. Zero Field Labs, the Summit Sponsor is focused on building Blockchain applications for Indian Banks, FIs & other industries. IIT Madras will be hosting Vitalik Buterin’s special lecture on crypto economies on 9 Dec in Chennai.

"We are proud and excited to be the Sponsor of "The FIRST EVER - BLOCKCHAIN INDIA SUMMIT" to lay a strong foundation & further accelerate the growth of this next-gen "Blockchain Technology" in India and worldwide." says Mr. Subash George Manuel of CryptoCarbon, a new generation Crypto Currency which has been backed up by a cashback platform.