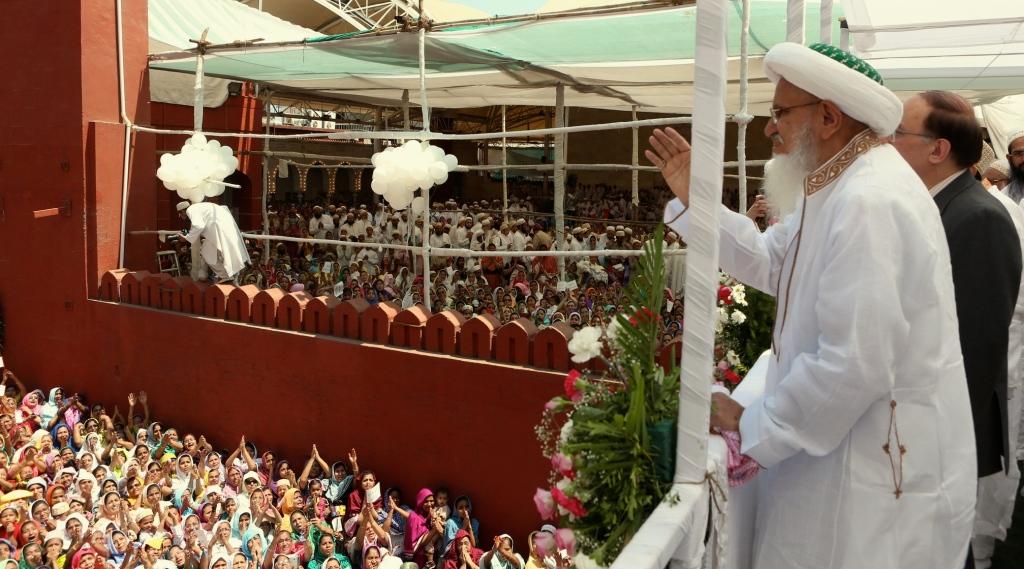 His Holiness Syedna Mufaddal Saifuddin, the 53rd Dai al-Mutlaq and head of the worldwide Dawoodi Bohra Community receives a rousing and colourful welcome from his followers on his return from a 22 days pilgrimage to Najaf, Karbala and Yemen

Mumbai, Maharashtra, India:  His Holiness Syedna Mufaddal SaifuddinTUS returned to Mumbai in the early hours of Friday after a 22 day pilgrimage, his first as the 53rd Dai al-Mutlaq and head of the worldwide Dawoodi Bohra Community. To celebrate his return and historic journey, today, thousands of Dawoodi Bohras gathered for a felicitation ceremony at Saifee Masjid in Bhendi Bazaar, Mumbai.

Prior to his departure from Mumbai, His Holiness publicly declared his resolve to follow in the noble footsteps of his esteemed father in all his actions and deeds.  Fifty years ago, His Holiness’ father Syedna Mohammed BurhanuddinRA commenced his tenure as al-Dai al-Mutlaq with a pilgrimage to the mausoleum of Imam Husain AS and inaugurated a sepulcher dedicated to Imam Husain AS by his father the 51st Dai al-Mutlaq. Similarly, His Holiness Syedna Mufaddal Saifuddin continued this legacy by commencing his tenure with a pilgrimage to the shrine of Imam Husain ASand inaugurating a masjid constructed by his father the 52nd Dai al-Mutlaq.

His Holiness visited the cities of Najaf and Karbala in Iraq to pray at the shrines of Moulana Ali b. Abi TalibSA and his son, Moulana al-Imam al-HusainSA. Through this pilgrimage His Holiness sought divine blessings and strength as he embarks upon the noble task entrusted to him of leading and guiding the worldwide Dawoodi Bohra Community.

In Yemen, His Holiness traveled to ZiJiblah to pay his respects at the mausoleum of the Yemeni queen Arwabinte Ahmed, the spiritual mother of the Duat Mutlaqeen (pl. of Dai al-Mutlaq). He offered his respects to his predecessors, the Duat Mutlaqeen interred in various Yemeni cities and villages, especially the 3rd Dai al-Mutlaq Syedna Hatim whose mausoleum is in al-Hutaib, Haraaz.

Like his father, His Holiness strongly advocates the socio-economic betterment of the Haraaz region. Their initiatives to develop its public infrastructure and further its agriculture have brought great stability to the region in a time when major urban cities are facing economic downturn and insecurity. During this visit, he inaugurated a newly constructed asphalt road that leads to Shibaam one of the highest peaks in Haraaz. While in Zabid, he dedicated a new rest-house and community center.

His Holiness Syedna Mufaddal SaifuddinTUS was received as a State Guest in all the countries he visited, enhancing India’s efforts to strengthen its ties with those nations and its people. During his visit, His Holiness met with senior members of the establishment including the President of Yemen.

Photo Caption: His Holiness Syedna Mufaddal Saifuddin, the 53rd Dai al-Mutlaq and head of the worldwide Dawoodi Bohra Community receives a rousing and colourful welcome from his followers on his return from a 22 days pilgrimage to Najaf, Karbala and Yemen