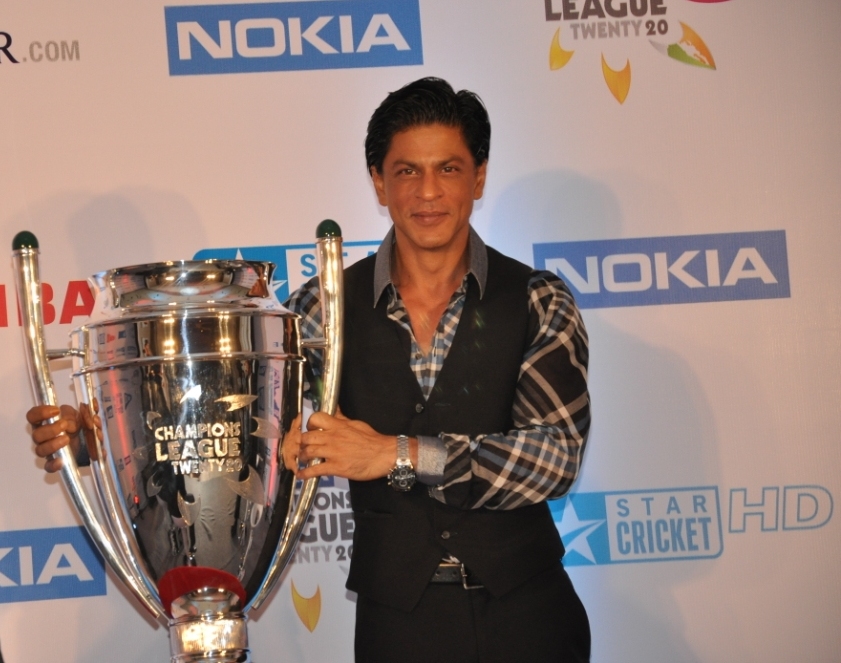 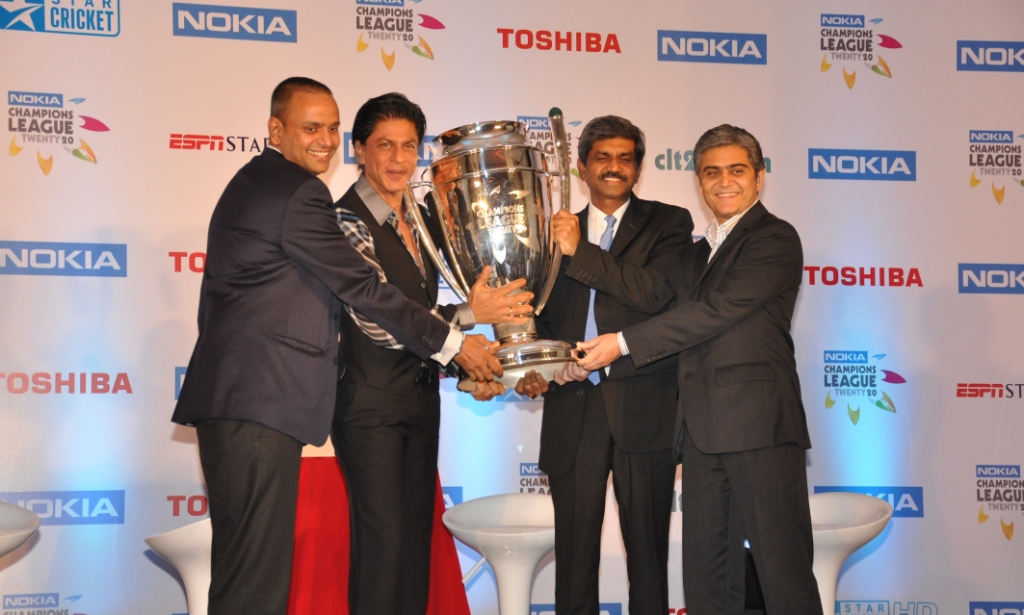 Mumbai, Maharashtra, India:  -- Am quietly confident about KKR in the tournament says King Khan
-- Nokia comes onboard as the title sponsor of Champions League Twenty20
-- NCL T20 to be telecast in 174 territories across the world in record 18 languages
-- All 29 matches to be broadcast live & exclusive on STAR Cricket and STAR Cricket HD; ESPN will showcase main round matches in Hindi

ESPN STAR Sports, the official broadcaster and commercial partner of Nokia Champions League Twenty20, today formally unveiled Bollywood legend and superstar, Shahrukh Khan, as the face of the tournament. Nokia, the title sponsor of Champions League Twenty20, also announced ambitious plans to promote its association with the tournament. Nokia announced the ‘Nokia Ke Asli Champions' campaign providing the consumers an opportunity to showcase the ‘Asli Champions' in them. Select lucky winners will get an opportunity to be part of Bollywood actor Priyanka Chopra's ‘Champion team' and watch the finals live with her. ESPN STAR Sports (ESS), the global commercial rights partner of NCL T20, further announced that it will showcase the tournament to fans in more than 174 territories worldwide. NCL T20 will also be telecast in a record 18 different international languages across the world, making it one of the few cricket properties presented to fans in such a customised manner, a feat made possible by ESS and its global partners. The languages include Norwegian and Portuguese (for the very first time), English, Bulgarian, Czech, Danish, French, German, Greek, Hungarian, Italian, Polish, Romanian, Russian, Serbian, Swedish, Turkish and Hindi. In India, all the 29 matches would be broadcast live & exclusive on STAR Cricket and STAR Cricket HD. ESPN will carry all 23 matches of the main tournament with Hindi commentary.

Nokia's consumer initiative, Nokia Ke Asli Champions, has been innovatively designed to connect people to their passion - cricket. To be a part of the campaign, Nokia is running a series of consumer competitions to identify ‘Asli Champions' across various categories such as the Air Cricket Champions, Commentary Champions & Cheer Champions across select cities in India. Select winners will get an opportunity to be part of Priyanka Chopra's ‘Champion team' and watch the final match live with her besides other exciting prizes. The contest will be running across the following cities - Delhi, Mumbai, Chandigarh, Pune, Bangalore, Chennai, Hyderabad and Kolkata between 15th September and 5th October, 2011.

Speaking on the occasion, Aloke Malik, Managing Director, ESPN Software India Pvt Ltd, said, "Shahrukh Khan is a great fit as the face of Nokia Champions League Twenty20 and we are delighted to have him with us on this fascinating journey. The promo which features Shahrukh is already on-air and has received rave reviews. His participation is however not limited to being the public face of NCL T20. As a team owner, I am sure he will be looking forward to Kolkata Knight Riders qualifying for the main edition of the tournament. We wish him the very best for the qualifying round of matches.

It is a matter of great pride that Nokia India has come on board as the title sponsor. I am confident that this association will unlock a lot of value for them. Overall, we are delighted with the advertiser response on Nokia Champions League Twenty20 till date. We are well on our way to achieve our commercial objectives from the event. Nokia, Toshiba, Coca Cola, Ambuja Cements, Next Retail and Digiworld have already joined us as on-air sponsors while Nokia, Toshiba and Coca Cola have signed up as on-ground sponsors as well. Over the next few days we will announce further names as we get them on board."

Sundar Raman, CEO, Nokia Champions League Twenty20, said, "The 2011 edition of the Nokia Champions League Twenty20 is set to be the tournament's biggest and most successful yet. The addition of a six-team qualifier for the first time adds another dimension to the tournament. It also provides a record number of teams with a chance to win club cricket's most prestigious prize. No other cricket competition provides the same level of opportunities for domestic players. NCLT20 is the place where cricket's next superstars have a chance to match their skills against the best of the best on the world stage. In previous years, players have taken their chance and used NCLT20 as the launching pad for their careers and we're expecting this to continue when action gets underway later this month. Selecting a winner is impossible. We have former champions, runners-up and semi-finalists already qualified and more than 100 players with international experience across the 13 teams.

The equal spread of world-class talent across the teams means we are in for an exciting roller coaster ride until the Champion is crowned. One thing is for certain however - the team that emerges victorious on 9 October in Chennai will rightly claim the mantle of world's best."

D Shivakumar, Managing Director, Nokia India, said, "Cricket holds a special place in the hearts of Indians and we have been associated with it over the years through our association with the T20 World Cup, Kolkata Knight Riders and IPL. We are excited to be the title sponsors for Champions League T20 as it reinforces our commitment to the youth by connecting them to their passion."

Commenting on his association, Shahrukh Khan, added, "I am extremely proud to be associated with Nokia Champions League Twenty20. I am doubly happy as my team Kolkata Knight Riders is also in with a chance of qualifying for this prestigious event. NCL T20 is a unique concept as the best T20 teams from across nations face off for the ultimate prize – being Champion of Champions. It doesn't get better than this as the best T20 exponents bring out their best fare for the cricket loving fans worldwide.

I am also quietly confident about my team - Kolkata Knight Riders. I believe that the team is pulling out all stops to prepare for this event and I feel that along with the other IPL teams KKR also has a good chance of first qualifying to the main edition and then excelling in further matches. We are working hard and we promise to deliver wholesome and exciting cricket for our fans."

As per Mr Tengguo Wu, Director – Digital Products, Home Appliances & Services Division, Toshiba India, "We at Toshiba India are very excited to be associated with the prestigious Champion's League T20 tournament. We feel it's the right time for Toshiba to enter the big league and showcase our technology and marketing strength in the Indian market. We are all set to take the market by storm, our association with Sachin Tendulkar and this tournament is a part of our overarching strategy of reaching out to Indian consumers in an impactful way and being among the top brands in the India durables and PC market. This is just the beginning for us at Toshiba - we are "Ready for More". We wish all the teams the very best."

This year's event features for the first time a six-team qualifier that will determine the final three participants in the group stage. The qualifiers will be played in Hyderabad from 19-21 September while the final 10-team Nokia Champions League Twenty20 starts in Bengaluru on Friday, 23 September and ends with the final on Sunday, 9 October in Chennai.

The third edition of Nokia Champions League Twenty20 will see more than 100 players who have experience at the international level. Some of the champion players who will be seen in action include MS Dhoni, Sachin Tendulkar, Virat Kohli, Suresh Raina, Munaf Patel, Daniel Vettori, Chris Gayle, Kieron Pollard, Jacques Kallis, Mike Hussey and Shane Watson.

About the Nokia Champions League Twenty20

An initiative of three founding members – the Board of Control for Cricket in India, Cricket Australia and Cricket South Africa - the Nokia Champions League Twenty20 is a platform where the world's best domestic teams get the opportunity to pit their cricketing skills against each other. ESPN STAR Sports is the commercial rights holders for Champions League Twenty20 for a period of 10 years. The 2011 edition of the tournament will take place in India from 23 September – 09 October, 2011.

ESPN STAR Sports is a 50:50 joint venture between two of the world's leading cable and satellite broadcasters. As Asia's biggest sports content provider, ESPN STAR Sports combines the strengths and resources of its parent companies – Walt Disney (ESPN, Inc.) and News Corporation Limited (STAR) – to deliver a diverse array of international and regional sports to fans across multiple platforms.

ESPN STAR Sports showcases an unparalleled variety of premier sports from around the globe featuring some of the most iconic sports events to a cumulative reach of over 300 million viewers in Asia through its 23 television networks and 2 broadband network, each localized to deliver differentiated programming to meet diverse needs of Asian sports fans.

To view the photographs, please click on the link given below: