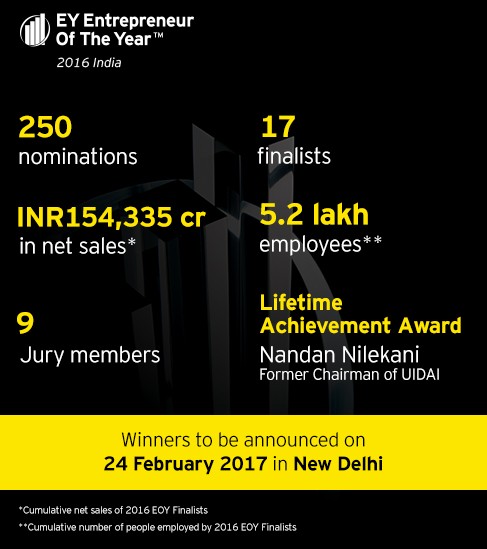 New Delhi, Delhi, India:
​​
EY, the global professional services organisation, today announced the selection of 17 of the country’s most exceptional entrepreneurs as Finalists for the 18th Entrepreneur of the Year™ - India 2016. The Finalists have been selected from among 250 outstanding nominations and will be felicitated at a grand celebratory Awards Banquet to be held on 24 February in New Delhi.

Together, these 17 Finalists have combined revenues of over INR 154,335 crore (USD 23.38 billion) and are providing employment to over 5.2 lakh people in India and globally.

Mr. Dilip Shanghvi, Jury Chairman and Managing Director, Sun Pharmaceuticals says, “Like previous years, this year’s finalists too represent extremely successful companies that have not only disrupted the industry with a new business model but have disrupted themselves to chart a new growth path. We need more entrepreneurs to propel our country’s growth and it is important to recognize such innovative entrepreneurs.”

The Finalists for the EY Entrepreneur Of The Year™ 2016 India Awards are:
Mr. Nandan Nilekani will be honored with the Lifetime Achievement Award for his invaluable contribution to the Unique Identification Authority of India (UIDAI), which is a pioneering citizen identification program, unparalleled in scope and scale worldwide. As the Honorary Advisor to the National Payments Corporation of India (NPCI), he has also helped create the ecosystem for digital financial services in India. He has also played a major role in the growth of the Indian Information Technology industry and is a recipient of the Padma Bhushan, India’s third highest civilian honor, in 2009.

Mr. Uday Kotak, Managing Director, Kotak Mahindra Bank and winner of the World Entrepreneur Of The Year Award 2014 says, “I was delighted to be part of this Jury and impressed with the robustness of the process. This year’s Finalists truly define the India of today and tomorrow. What is really interesting is that we are seeing real-world businesses adopting digital and transforming themselves. My message to every entrepreneur in India is, “Go out there, build your dream and more importantly, build a business model that is sustainable over time.”

Says Ms. Kalpana Morparia, CEO, JP Morgan Chase, South Asia and India, “What made the Jury process truly outstanding is the richness of the candidates. This year’s theme for the Awards – ‘Ideas, Innovation and Inspiration’, are the three 'I's that are driving India’s economy and many of the 2016 finalists embody this theme. Looking beyond the digital services companies, what is phenomenal is that existing established businesses are disrupting their own models to keep pace with the digital economy.”

Watch what the jury has to say about the EOY 2016 finalists in this video.

The winners will be announced across several categories, while the national winner will represent India at the EY World Entrepreneur of the Year (WEOY) awards in Monte Carlo from 8-11 June 2017.

Rajiv Memani, Chairman, EY India, says, “What strikes me about our 2016 Finalists is how they have acquired tremendous scale and size from what were clearly modest beginnings. A strong focus on the customer and a business model based on innovative products and services for niche markets have enabled them to create a lasting impact. Also, reliance on technology and a bold vision for the future has helped them scale up rapidly.”

Says Farokh Balsara, Partner and EOY India Program Leader, “Entrepreneurs have the power to impact our lives. Their unyielding drive to seize the power of transformative ideas creates jobs, energizes markets, builds wealth and spurs economic growth around the world. We salute their passion and insight that make them different and exceptional. Our EOY 2016 India finalists are a rare group of individuals who with their disruptive ideas and incredible innovation are inspiring a whole new generation of entrepreneurs.”

Zarin Daruwala, Chief Executive Officer of Standard Chartered and sponsor of the EOY 2016 India Awards says, “We are delighted to sponsor The EY awards, which captures and celebrates the spirit behind India’s economic resurgence – the Indian entrepreneur.  Never before in our history have we seen ideas and innovation spur on with such zeal, whether it is in the exciting world of start-ups with technology as the centrepiece of business ideas, or conventional business which are reshaping themselves by using technology to unleash the full potential of their products and services.  India, today, has the third highest number of Unicorns globally, with two of them in the top 20, and the IITs rank fourth across all institutes in producing billion dollar start-up entrepreneurs. The lasting impact is in the manifold ways entrepreneurship touches and changes lives: creating employment, raising health and education standards, and ushering in a stable and progressive society.  With the government encouraging new entrepreneurship through ‘StartupIndia’ and the success stories already scripted, India is becoming the crucible of ideas, ambition and entrepreneurial spirit.”

Read more about the 18th EY Entrepreneur of the Year™ at ey.com/in/eoy.

About EY Entrepreneur Of The Year™ Award

EY Entrepreneur Of The Year is the world’s most prestigious business award for entrepreneurs. The unique award makes a difference through the way it encourages entrepreneurial activity among those with potential, and recognizes the contribution of people who inspire others with their vision, leadership and achievement. As the first and only truly global award of its kind, EY Entrepreneur Of The Year™ celebrates those who are building and leading successful, growing and dynamic businesses, recognizing them through regional, national and global awards programs in more than 145 cities in 60 countries.

EY is a global leader in its Assurance, Tax, Transaction and Advisory services. Our insights and the quality services we deliver help to build trust and confidence in capital markets and in economies the world over. We develop outstanding leaders who team to deliver on our promises to all of our stakeholders. In doing so, we play a critical role in building a better working world for our people, for our clients and for our communities.

This news release has been issued by EYGM Limited, a member firm of the global EY organization. It also does not provide services to clients. 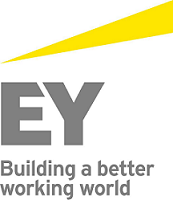 EY, the global professional services organisation, today announced the selection of 17 of the country’s most exceptional entrepreneurs as Finalists for the 18th Entrepreneur of the Year™ - India 2016.