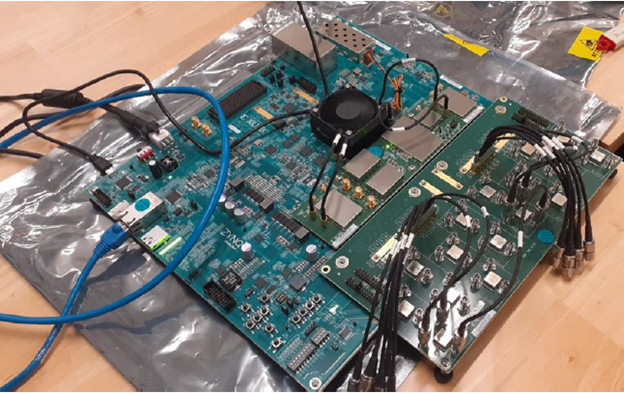 Dr Nagendra Nagaraja CEO and Founder of QpiAI suggested “India and Finland have had a close working relationship in telecom technologies. Both countries have now worked out a detailed plan for establishment of the Indo-Finnish Virtual Network Center on Quantum Computing. The MoU between QpiAI and QuantrolOx will further add to this momentum by providing advanced quantum computing testbeds for Indian and Finnish quantum companies and research labs to test and develop their quantum technologies.

QpiAI is also working on semiconductor-based spin qubit technology, which is highly scalable and uses the mature semiconductor fabrication process. QpiAI has software and platform products in the market. It will transition its software platforms which currently run on the GPU and CPUs to its 3-chip solution of hybrid classical-Quantum compute by providing 20x -100x performance improvements in optimization workloads.

Vishal Chatrath CEO of QuantrolOx and Prof. Andrew Briggs Executive Chairman of QuantrolOx, Professor at University of Oxford, are joining the advisory board of QpiAI to enable strategic alignment between the two companies. QpiAI Advisory board also has industry stalwarts like Dr Madhusudan Atre - former India head and Managing Director of AMD, Applied Materials, LSI, Lucent Microelectronics; and also advisor to startups and incubators. QpiAI board also has Dr Navakant Bhat who is former Chair of CeNSE and currently Dean of IISc.

“With the Indian government’s commitment of $1 Billion to the Indian quantum industry, we see India as a major market. We are excited to provide QuantrolOx technology to India’s first 25-qubit quantum computing testbed. This is just the beginning of our partnership with QpiAI to develop joint products and solutions for the global marketplace,” added Vishal Chatrath, CEO and co-founder of QuantrolOx.

“Ultimately, the challenge going forward for the industry to scale will be to create a supply chain in which specialist companies can focus on their core strengths. Such ecosystems will lead innovation and drive down costs so that in the next 5-10 years the world will have not 10s of quantum computers but thousands and possibly even 10s of thousands of quantum computers. I am excited at the prospect of a new quantum ecosystem developing between Oxford, Finland and India,” added Prof Andrew Briggs, Executive Chair of QuantrolOx.

“Having Quantum technology development in India will create next generation high-technology jobs in cutting edge research and technology development. This also builds ecosystem for leading inter-disciplinary R&D. I am very glad to see QpiAI forge partnership with QuantrolOx and lay the foundation for India-Finland partnership in the area of Quantum technology. We are glad that we will be working with Dr Andrew and Vishal to make Quantum computing commercially available across India, Europe and southeast Asia for industrial sectors," Dr Atre suggested.

"When we were first discussing Quantum hardware in India in 2020, that was before pandemic, Dr Nagendra was suggesting 20 qubit setup by 2024 in Bangalore. Now with this partnership it looks like we will be having multiple 25 Qubit testbeds right here in Bangalore by the end of 2022. This should enable a thriving Quantum ecosystem. Currently 25 qubits is based on superconductors and eventually 2048 qubits based on CMOS spin qubits will be very exciting. 2048 logical qubits can enable a lot of commercial applications. We would like to use all our expertise in CMOS fabrication to make this technology breakthrough happen. That would be a major technology breakthrough from India. We would like to see Dr Nagendra and team achieve the same as soon as possible with a lot of collaboration with Quantum ecosystems including QuantrolOx, Oxford and the IISc community. QpiAI has an excellent team and building commercial grade Quantum computers right here in Bangalore is very exciting. It is great to see collaboration between India and Finland to form this thriving Quantum ecosystem. The association of QpiAI with Dr Andrew and Vishal is a major step forward in achieving this goal," added Dr Navakant.

This partnership will create revenue generation opportunities for both the companies, QpiAI has QpiAISense hardware platform for controlling qubits ready to be shipped, on which QuantrolOx will develop control software for both superconducting and semiconductor-based spin qubits.

QpiAI is building its own quantum computing lab to house cryogenic electronics and is in process to acquire land for India’s first private quantum computing lab facility. The QpiAI quantum lab will be part of bigger Qpi Technology Quantum Park, which houses the labs and manufacturing facility for its subsidiaries like super conductor based single photon detector, single photon source, HTS tapes and HTS cables for SuperQ, solid state battery prototyping facility for Qpivolta using Quantum and AI technologies and labs for Qpivolta-ET for Energy transition experiments using material discovery and carbon capture, Silicon photonics testing lab for Qpisemi for its AI20P AI processors and lab scale model Quantum data center designed by Qpicloud. Currently Qpicloud which is incubated in DSCI (Data security Council of India) NCoE (National Center of Excellence) for cybersecurity, is also working on Quantum security for data centers and cloud computing, whose lab will be enabled in Qpi Technology Quantum Park

QpiAI is expanding in Finland to enable partnership with European quantum ecosystems. QpiAI already has a subsidiary in the US QpiAI Inc. QpiAI also intends to open an office in Japan for customer support and after sales support for Japanese customers.

QpiAI (https://www.qpiai.tech) is World leader in AI and Quantum computing. QpiAI is integrating Quantum computing and AI vertically to offer solutions to areas like manufacturing, industrial, transportation, finance, pharma and materials. It has various software platforms and products including QpiAI-pro, QpiAI-explorer, QpiAI-logistics, QpiAIopt, QpiAIsim, QpiAIML. It is building complete hardware stack based on 3 chip solutions of Trion (universal optimizer Chip), Bumblebee (scalable cryogenic control chip) and scalable spin-qubit based QPU (Quantum processing unit) , which can be scalable to 2048 logical qubits. QpiAI is currently ready with room temperature control electronics based on its hardware platform QpiAIsense. QpiAI is subsidiary of Qpi Technology (https://www.qpitech.holdings ).

QuantrolOx (https://quantrolox.com/ ), an Anglo-Finnish spinout from University of Oxford, is building automated machine learning based control software for quantum technologies to tune, stabilise, and optimise qubits. QuantrolOx’s software is technology agnostic and applicable to all types of quantum technologies. Initially the company is targeting solid-state qubits where the team has already demonstrated substantial practical benefits.

QpiAI, a leader in quantum computing and AI today announced a MoU with Finland based, Oxford University spinout QuantrolOx. The two companies will work together to provide complete quantum solutions to customers in Europe, India and Asia.