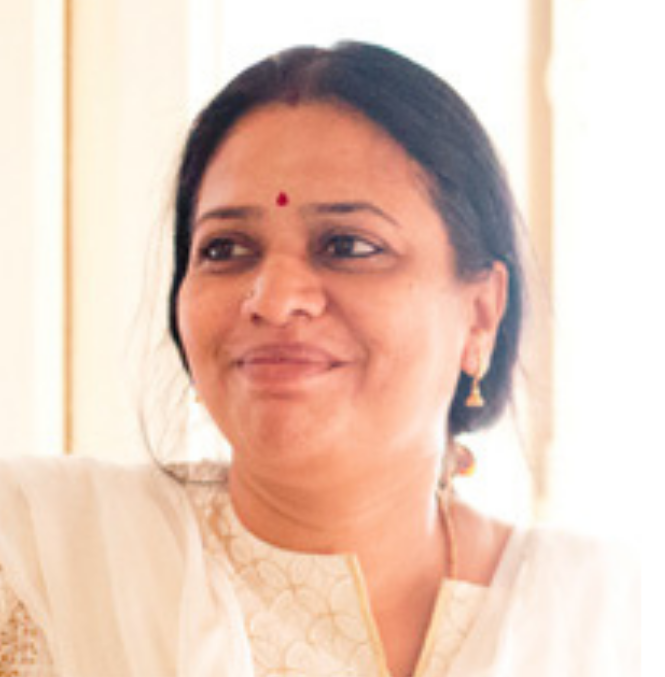 Kolkata, West Bengal, India:
Geeta Venkadakrishnan made herself available wherever there was a crisis and her help could alleviate anybody’s pain. In the times of Covid pandemic, right from the day of lockdown, when people were sitting in the comforts of home fearing the virus, she was on the forefront, helping the neediest, feeding the migrant workers and homeless. She provided sanitary napkins to women and relocated pregnant women. She said she can’t sit at home with so many people suffering around her. Her story as Covid warrior was also covered on 16th April 2020 by NY Times Bestselling Author – Mei Mei Fox in Forbes Magazine global edition. She always believed in leading from the front and no challenge was big enough for her.

On 26th January, 2001, major earthquake struck in Bhuj - Gujarat and she was there the next day leading team of volunteers for relief work. In December 2004, Tsunami hit the southern coastal region and she was there in Chennai providing shelter, food and hope to the devastated people. She used to recollect her stories of the devastation by Tsunami and during the relief work, how she survived only on bunch of bananas. Situation was never a deterrent for her when it came to traveling in remote places with no shelter or toilet facilities.

“She touched many lives and left them easier in one way or the other. When the news of her passing away came, it came as a shock to me. At the time, I thought that I was one of the few people who had seen her immensely altruistic side. But I was flooded with calls across friends from the Corporate sector, Academia, Government and NGO teams who had stories to share of how their lives had been impacted by her work and friendship,” Adarsh Kataruka, Founder & CEO, SoulAce Social Venture.

In the year 2011, there was a major fire in the middle of the night at 3 am in a reputed hospital in Dhakuria, Kolkata. Nearby slum communities trusted her even more than the fire brigade and reached out to her when they first noticed the fire. She got a call as soon as the incident happened. She reached even before the brigade could reach the incident and along with her team began the rescue effort.

“We were fortunate to have seen her in action, helping people selflessly. I have known Geeta working 16-18 hours a day who would also go for surprise night patrolling rounds on the streets of Kolkata along with Police teams at 2 am to rescue street children. Geeta started her career with Mother Teresa and would always say how she observed and learned being compassionate and serving others. She was a force to reckon with and used to encourage every one to strive for the best and serve others. Geeta never shied away from using her wide network for any little support it could bring to a child or youth looking for a job. In the last few years, I had started celebrating my daughter’s birthdays at the orphanage she used to run and encouraged many of friends to do so,” recalls Adarsh Kataruka.
Geeta used to wear multiple hats as a social worker and supporting organisations in either professional or personal capacity. Her major involvement was with Hope Kolkata Foundation where she was Founder Director for nearly 20 years, and instrumental in setting up initiatives for street children, running shelter home, orphanage, women skill centres, hospital for the underprivileged, model anganwadi among others.

Geeta came in contact with SoulAce 11 years back and she immediately got associated providing regular guidance to its teams and partners from our first project itself. Teams benefited from knowing about multiple challenges of working at the grass root from her. She believed in cross learning and was able to innovatively use her learnings across organisations and roles.

Recognising her contribution in the social sector, she received multiple accolades both in India and globally. Some of the recent awards she received was Aparjita Award for 2020 from Sanmarg a leading newspaper; ICC Social Impact Award 2020 for promoting education from Indian Chamber of Commerce; Rashtriya Swayiamsiddhi Samman from JSPL Foundation 2019; Inspiring Award in the year 2019 from Britt World Wide among others.

Though coming from humble background, she was known for donating all the cash awards she received through global recognitions to grass root NGOs to support them.

Her passing away is a great loss to society and void which would be hard to fill, considering the kind of work she was leading and was directly involved in serving more than 1 million people over the years. She lived her life for the people and passed away while still serving the people. She is survived by her husband and son, without whose support she wouldn’t have been able to achieve what she did.

Her life is a source of inspiration and the more people are able to imbibe some of her courage, passion and selfless approach, it would be a better world.