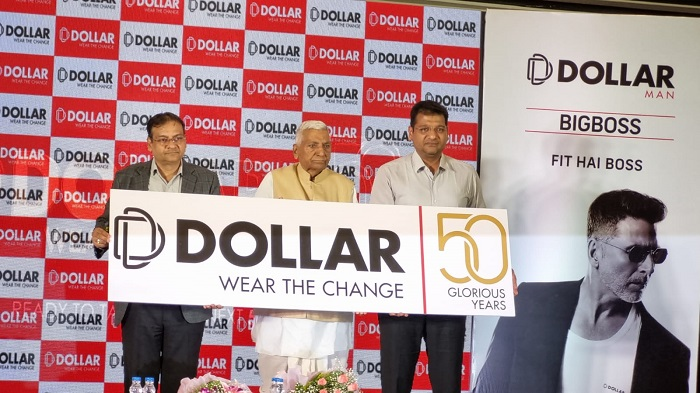 As a part of the company’s Green Mission initiative, the existing 4 MW Solar Power Plant will be increased by 2MW unit taking it up at 6MW. A land has also been purchased in Tirupur where the knitting unit will be expanded. The company would open 125 Exclusive Brand Outlets, mostly in Tier 2 & Tier 3 cities, by 2025.

Dollar has also signed leading Bollywood actress, Ms Yami Gautam as their Brand Ambassador for the Dollar Missy segment. A new Advertising campaign featuring her would be launched soon.

“Steady and sustained growth, based on a clear vision has enabled Dollar Industries to become a global brand. The foundation of The Group is based on two core values: Quality and Excellence in the pursuit of realising our goals. By focussing on these and the commitment to offer the best to our customers to meet their growing needs, have been the underlying factors of the groups' success. I am glad that we have followed these principles over the last 50 years. It has been the hard work of the employees over the years, who I always consider as a part of our family, who has helped us to turn this business into a major conglomerate to reckon with in the hosiery industry. With our third generation now entering the business and holding my hands in going ahead, I can feel the same spark that I felt when I started this business. The younger generation has been successful in making Dollar’s presence felt across e-commerce platforms which has given a great boost to the business,” said Mr Din Dayal Gupta, Founder & Chairman Emeritus, Dollar Industries Limited.

“Our viable advantage lies in our huge production capacity, a large product line, innovation, being contemporary and a reputation of offering world class quality at best price. We have continued to change and reinvent ourselves and revamped our brand and corporate portfolio over the years to make ourselves contemporary with time as we believe that the success of a great family business lies in the perfect blend of both worlds - experience clubbed with modern thinking and new-age vision. It has been a great journey for all of us and we can look back only with fondness. Our growth is sustained by offering newer designs and quality products according to customer’s specifications and demands. Ofcourse, brand loyalty has also played an important role in our growth. The burgeoning success in our newly launched Athleisure range vindicates our plans. We expect similar success with our soon to be launched women’s lingerie range under Dollar Woman. The goal now is to be a Rs. 2000 crore company by FY 2024-25,” said Mr Vinod Kumar Gupta, Managing Director, Dollar Industries Limited.

Dollar has recently associated with Rajasthan Royals as the principal sponsor, with the intention of enhancing the brand visibility of Athleisure range, nationally. Going forward, Dollar Industries Limited is looking out to expand its market into African countries besides being successful in Middle East.

The Company also announced its annual results for the year ended 31st March, 2022.
Additionally, under its CSR wing, Dollar Foundation, the company has successfully initiated various CSR activities that focused on providing for the society over the years. From this year, the company will be installing 35 - 40 water kiosks at Delhi Metro station and a significant number of the same in and around Puri in Odisha by 2025. Dollar will also be setting up of eye testing camps for children at Sundarbans, West Bengal.

In the recent past, Dollar has revamped its brand architecture and unified all of the products into five major categories - Dollar Man, Dollar Woman, Dollar Junior, Dollar Always and Dollar Thermals as a part of the aggressive growth strategy. Apart from this, adhering to latest technologies and innovations have helped the company in creating a benchmark in the industry. Dollar believes in eco-friendly ways of production, and thus have introduced a zero - discharge technique with evaporation system.

From a humble beginning as a hosiery brand to a leading name in the innerwear segment, Dollar Industries Limited ranks among the top hosiery and garment manufacturing giants in India, covering the entire range of knitted garments, from basic wear to outer wear. Behind its success lay a saga of business transformation, dedication, courage and confidence to swim against the tide and go beyond the call of duty. The focus has always remained on the demanding needs of a globalized world and end customer satisfaction. Today through its advanced quality products, Dollar has focused on achieving global excellence in cost, quality and productivity. The styles introduced by Dollar have always stayed in tune with the latest fashion.

Identical with top quality and value for money products, brand Dollar enjoys the trust of millions of satisfied consumers across the globe leaving far reaching footprints in the global market. The company has a substantial pan-India presence and has established its market abroad, in countries like UAE, Oman, Jordan, Basra, Qatar, Kuwait, Bahrain, Yemen, Iraq, Nepal, Sudan and Nigeria in the past few years. The Company has also been listed in NSE & BSE a few years ago.

Dollar Industries Limited holds 15% of the total market share in the organized segment and is the first Indian innerwear company to have a fully integrated manufacturing unit which is equipped with all the latest processing technology and the top-most finishing range to produce finished raw material dyed in any possible colour.