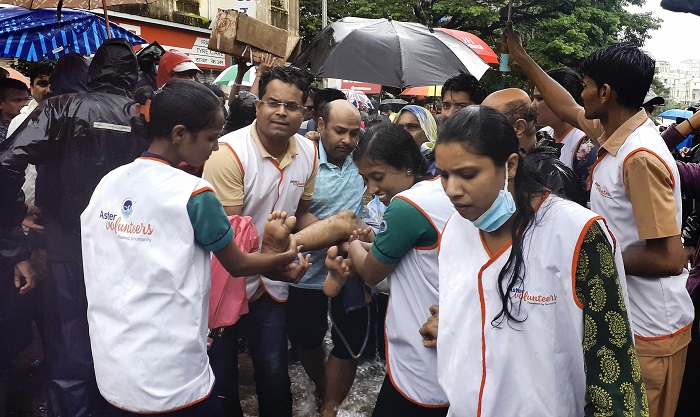 Aster Volunteers in Kolhapur provide support to people in affected areas
United Arab Emirates & Bangalore, Karnataka, India:
With the heavy rainfall across the country causing huge damages, individuals and groups have sprung to action offering a helping hand to the victims. One such group to offer tremendous support in Kolhapur and Kerala is Aster Volunteers- the global corporate social responsibility programme of Aster DM Healthcare. In all, more than 50,000 lives have been touched during this year’s flood across Kerala and Kolhapur till date and the efforts are still continuing.

Nearly 500 Aster Volunteers from Aster Aadhar Hospital were on their feet throughout when the city was flood affected and daily on an average 500 food packets were distributed. A total of 12,000 flood victims were provided food packets during the flood-heavy days. Apart from this, 35 relief camps were held and eight ambulances were on-field treating the patients throughout the eight days of flood-heavy days. The volunteers also provided medical aid to the needy, thus ensuring healthcare services for the flood-affected victims.

In addition to the above, the Aster Volunteers team along with external volunteers assisted in cleaning up of 200 affected houses.

With more than 600 Aster Volunteers deployed in the flood-affected areas of Kerala like Malapuram, Wayanad, Calicut, Kannoor and Kochi, the team has impacted more than 38,000 people from Kerala. Through 30 relief camps and 68 medical camps and round-the-clock ambulance services on field, Aster Volunteers focused on disease prevention in the flood affected cities.

This is the second year that flood relief efforts are being conducted by Aster Volunteers in India. Last year when the Kerala floods left thousands of people homeless, Aster Volunteers were the first responders on ground to provide medical and humanitarian aid. This was followed by the launch of Aster Homes initiative which aimed to provide 250 homes to the flood affected victims who lost everything. The first set of houses are now in the process of being handed over.

Aster Volunteers programme, the global corporate social responsibility initiative of Aster DM Healthcare, was launched on occasion of the company's 30th anniversary in 2017 and provides a platform which bridges the gap between people who would like to help with those in need. Driven by Aster DM Foundation, through various initiatives, the programme has been able to impact 1 million+ lives across geographies. Operating primarily across 9 countries including GCC and India, Aster Volunteers have been able to treat 224,194 individuals through mobile medical camps; 152,897 people have benefitted from basic life support trainings and 30,580 free surgeries as well as health investigations were conducted; supported with the recruitment of 108 differently abled people and treated 464,284 people through 3,271 medical camps. The aid programme in Somali land, Jordan, Bangladesh and Kerala has benefitted 233,488 people.

Aster DM Healthcare Limited is one of the largest private healthcare service providers operating in multiple GCC states and is an emerging healthcare player in India. With an inherent emphasis on clinical excellence the Company is one of the few entities in the world with a strong presence across primary, secondary, tertiary and quaternary healthcare through its 25 hospitals, 115 clinics and 231 pharmacies. These are manned by our 20,329+ workforce (including approx.. 1230 doctors on fee for service basis) from across the geographies that we are present in, delivering on a simple yet strong promise to its people: “We’ll treat you well.” We reach out to all economic segments in the GCC states through our differentiated healthcare services across the “Aster”, “Medcare” and “Access” brands.