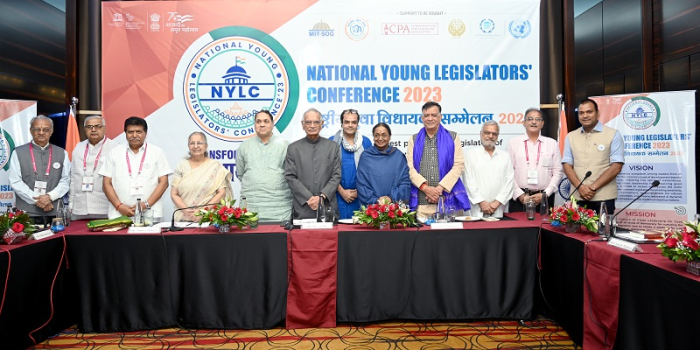 The working committee meeting was co-chaired by the noted former Speakers of Lok Sabha - Shri Shivraj Patil, Smt. Meira Kumar and Smt. Sumitra Mahajan. The incumbent and former Speakers of State Assemblies and Chairpersons of Legislative Councils from more than 15 states, former Chief Election Commissioners, and a few former bureaucrats also participated in the deliberations.

As India celebrates Azadi Ka Amrit Mahotsav currently and in another 2 years, India will be entering into the 75th year of implementation of the Constitution. The NYLC will connect these two memorable achievements in the history of our country by bringing young legislators from all across the country on one platform in a historic effort.

The NYLC once established will be organized jointly by the legislative bodies, non-governmental institutions and civil society with active support from the MIT School of Government, Pune. The NYLC will seek support from the Commonwealth Parliamentary Association (CPA), the Inter-Parliamentary Union (IPU) and UNESCO.

NYLC will aid in the creation of a cohesive ecosystem among leaders of all ideologies for the common cause of development beyond party politics, instilling the spirit of nationhood, encouraging clean leadership for enhancing good governance, and creating a model to be reckoned with globally. It will foster peer-to-peer learning aimed at designing innovative development solutions, in addition to developing ethical, spirited, and competent public leadership for formulating pro-people policies.

Shri Shivraj Patil, Former Speaker of the Lok Sabha said – “There are three very important aspects which are expected out of the legislature. The first is policymaking, the second is to make laws and the third is to check that laws are implemented. If young legislators are imparted knowledge of the law, policy making, and administration at an early stage, this would, in turn, change the democratic shape of the country and yield good outcomes for society.”

Smt. Meira Kumar, Former Speaker of the Lok Sabha said, “It was a wonderful conference and the interaction we had in the evening both were positive and successful. I congratulate Mr Rahul Karad and pay respect to his father Mr Vishwanath Karad. They are the guiding spirit behind NYLC.”

Smt. Sumitra Mahajan, Former Speaker of the Lok Sabha said, “NYLC shouldn’t be an end in itself but a means to obtain a bigger purpose where we sensitise our young legislators of the responsibility that they have ahead as they start their journey to serve the people of this country.”

Shri Rahul V. Karad, Chief Initiator, MIT-SOG said, “The time has come for our country's Young Elected Representatives to rise above partisanship and work toward the creation of a Unified, Strong, and Developed Bharat that will address the aspirations of countless young, old, and women alike. Only a united Bharat, led by a strong democratic leadership, can face the challenges of an increasingly divided world and show the international community the path to world peace. NYLC will act as a catalyst of ideas and as a concept that will ignite and strengthen the sense of national unity and responsibility among the young legislators who will be the future of Bharat.”

The National Young Legislators’ Conference is being held under the aegis of MIT School of Government (MIT-SOG). MIT-SOG has been at the vanguard for fostering innovative and flagship events in the past such as Bharatiya Chhatra Sansad, National Women Parliament, National Panchayat Parliament, and National Youth Parliament among many other events.

About MIT School of Government (MIT-SOG)

The MIT School of Government (MIT-SOG), a constituent unit of MIT World Peace University (MIT-WPU), Pune, is the first institute of its kind to initiate a two-year Master’s degree program in Political Leadership & Government or MPG (UGC-approved program) for a Career in Politics.

MIT-SOG was initiated in the year 2005 under the visionary leadership of Shri. Rahul V. Karad – Initiator & Executive President, MIT World Peace University with the vision of creating Ethical, Spirited, and Committed Political Leadership for the country from the grassroots and all walks of life.

Under the able guidance of Late. Shri. T.N Seshan, First Chairman, MIT-SOG, former Chief-Election Commissioner of India (also well known as the Father of Electoral Reforms in India), the curriculum for MPG program at MIT-SOG was designed with the complete involvement of highly decorated officials from Government, Politics, Judiciary, Media and Academia. MIT-SOG specifically caters to the need for training students in politics & government to become trained Political Leaders of the country.

The working committee meeting was co-chaired by the noted former Speakers of Lok Sabha - Shri Shivraj Patil, Smt. Meira Kumar and Smt. Sumitra Mahajan. The incumbent and former Speakers of State Assemblies and Chairpersons of Legislative Councils from more than 15 states, former Chief Election Commissioners, and a few former bureaucrats also participated in the deliberations.